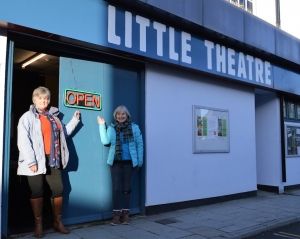 A new-look Hub café is taking shape behind the blacked-out windows of Sheringham Little Theatre. The venue has been closed all January for a major revamp of its foyer and the café which is a vital income generator to support its arts programming.

When the curtain goes up on the £85,000 project visitors will see a freshened up café with new flooring, ceilings, lights, heating and revived tables and chairs.

The toilets are getting new lighting and hand driers – and the whole building is getting LED lighting, a front door porch and window film to make it more energy efficient and help make its rising power bills more manageable.

People walking past after dark will have already noticed colourful new lighting on the fascia boards. 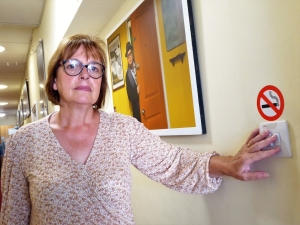 A charity-run seaside theatre is facing a new drama. How to pay for its surging power bill.

Bosses at Sheringham Little Theatre face a staggering rise in the cost of their electricity from the current £10,000 a year to a breathtaking £70,000.

The seven-fold hike is much higher than the 500pc increases being reported by many regional businesses who are asking for government help to survive.

The soaring cost of living also affects audience spending, seeing people questioning whether to have a trip to the theatre when they have their own food and power pressures at home.

The double whammy is even putting the future of the community arts venue, which has just finished its summer season, in jeopardy in the longer term. 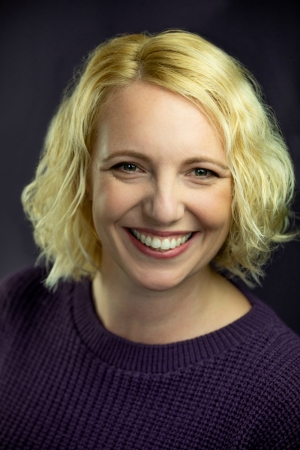 Actor Gillian Dean is set to play a blind woman in a summer drama thriller, using her own visual impairment to bring extra realism to the role.

But two weeks later she will play a fully-sighted character in a classic comedy, using stage craft and support from fellow cast members so her disability is not noticeable.

The inspirational 42-year-old from Lakenham, Norwich is currently rehearsing and learning lines for both roles at Sheringham Little Theatre this month.In Wait Until Dark she is blind Susy who is alone in her 1960s London flat with a doll being targeted by three desperate con men. In Table Manners she is Annie, who is trying to spend an illicit weekend with her brother-in-law.

Gillian said: “Thumbs up to the Little Theatre for casting a visually-impaired person to play Susy. “It is good for ethical reasons and because we disabled actors are under-represented - but I can also bring real authenticity to the role".

“I have played sighted roles before and it is all about talking to the cast and director about what I can and cannot do and finding ways around it. I can see enough not to fall over things but if, say, I cannot see a step on stage we can arrange for someone else to go up it first so I can follow. And if my cue is from a facial expression other cast members can make a noise or give me a nudge.”

Play director Brendan Murray said: “A sighted actor can represent a blind person on stage, but Gillian’s real-life experience is teaching us how to portray things from a genuine visually-impaired perspective. She is amazingly positive and a very able actor.” 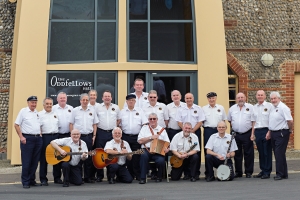 Panto, poetry, music, comedy, family shows and new drama are in the wings at Sheringham Little Theatre which has just announced its autumn and winter line-up.

Snow White is this year’s pantomime has plenty of local flavour, including seven friendly Norfolk locals and scenes set in Sheringham Woods.

And there is a welcome return of local youngsters to join the professional cast for the first time since Covid in a season running from December 10 to 31.

Other highlights from September to December include a new comic LGBT drama Time and Tide penned by north Norfolk-based EastEnders scriptwriter James McDermott, and amateur dramas about the life of codebreaker Alan Turing, and 1970s women’s “libber” Margot Mason.

Theatre director Debbie Thompson said: “There’s a huge variety of entertainment in our latest programme to cater for all ages, tastes, and interests – from popular family shows and music acts to cutting edge drama to make you think.” 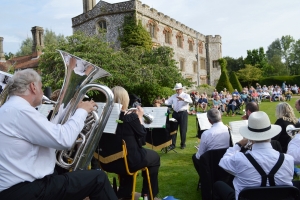 In a classic English summer sight and sound, brass band music filled the air of a Norfolk stately home garden.

The idyllic outdoor concert, by Cawston Brass at Mannington Hall, played to an all-ages 130-strong crowd from babes in arms and families to pensioners.

It helped raise funds for the promoters, Sheringham Little Theatre, and the band who are reigning regional champions.

A two-hour programme of stage musical and movie tunes entertained audience members, many of whom had picnicked beforehand in the grounds of the hall, which is home to theatre president Lady Walpole. 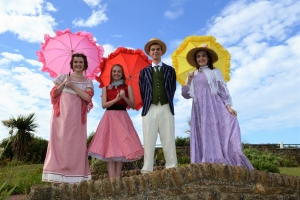 A community wardrobe is selling off some of its spare clothes to help raise funds for Sheringham Little Theatre.

Rails of items will be on sale at the theatre on Sunday July 17 from 11am to 3pm at a free-to-enter event.

Sadly a fashion show planned for the Friday night, July 15, has been cancelled due to unforeseen circumstances.

But the sale is still going ahead on the Sunday featuring vintage, retro and modern items including evening and day dresses, coats and men’s suits, along with some uniform pieces, fancy dress, fabrics and haberdashery, and accessories such as gloves, hats and wigs. 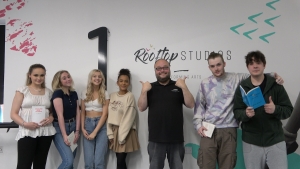 A summer drama set in a 1970s nightclub will break new ground by teaming up young performers from two theatres 180 miles apart.

Stags and Hens will open Sheringham Little Theatre’s summer season in August, bringing together soon-to-be married Dave and Linda, and their friends, when their pre-wedding party nights turn out to be at the same venue.

The action, set in the night club toilets, will see a 12-strong cast provided by young actors from the Little Theatre and the West Midlands county town of Stafford, where play director Nick Earnshaw also runs youth drama groups at Gatehouse Youth Theatre and Rooftop Studios. 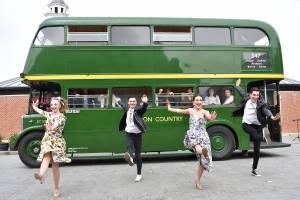 A double decker dose of music and fun from the swinging 1960s is one of the highlights of Sheringham Little Theatre’s summer season.

It runs from August 16-20 as part of a regional tour by Theatre on the Coast. Show producer Matthew Townshend said:  “Summer Holiday is approaching its 60th anniversary – it was a huge hit at the time and remains incredibly popular today. It is remembered with enormous affection. If you mention four young lads and a double decker bus, most people – even those much younger – will start singing ‘We’re all going on a summer holiday!” 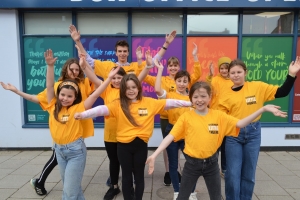 A feel-good show of stage song and dance favourites is set to be performed by a troupe of talented young performers at Sheringham Little Theatre.

A Celebration of Musical Theatre, running from April 14-16 at 7.30pm nightly, will see a cast aged eight to 16 showcase their stage skills.

They are excited and eager to step back into the limelight for the first time in two years, after the traditional Easter musical Guys and Dolls was postponed and then cancelled due to the Covid pandemic.

But the youngsters are aiming to come back with a bang with an hour-long show that will include hits from classic shows, including Guys and Dolls, as well as an introduction to some newer productions. 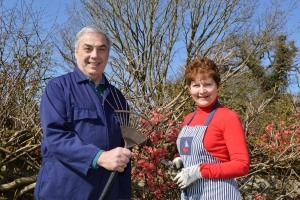 They are married in reality, as well as on stage – and both blissfully wedded to a shared lifelong love of amateur dramatics.

Peter and Amanda Howell play pompous councillor Albert Parker, and his downtrodden wife Annie, in a production of the classic comedy When We Are Married by the Sheringham Little Theatre Players which opens on March 31.

Since they first met in 1989 when Peter played Henry Higgins and Amanda Eliza Doolittle in My Fair Lady, the Coltishall pair have portrayed hundreds of roles mainly for the Cromer and Sheringham Operatic and Dramatic Society and the Maddermarket in Norwich.

They were wed 30 years ago, but have only played a married couple on stage less than a handful of times. That includes as King Arthur and Guinevere in Camelot on Cromer Pier in 2005 and as a widow and her dead husband Gordon in Life and Beth at the Maddermarket in 2014.