Throughout 2019, Break was the Maids Head Hotel's local charity. During the year staff and guests raised £1,184.06. We invited Danielle Gravestock from Break to receive the cheque and celebrate the fundraising success with our staff.

The money was raised through collection buckets, a Christmas raffle and donations at special events including resident tour guide Paul Dickson's Shardlake's Norwich tours during English Tourism Week and Norfolk Day and Rob Knee from the Paston Heritage Society who gave talks about the Pastons and the Paston Letters on Norfolk Day and on 22 November. The second talk was on the anniversary of the Maids Head getting it's first official written mention in a Paston letter. A team from the Maids Head – Jonathan Brasnett, Andrew Shorthose and Rose Taylor - also completed the City of Norwich half marathon in aid of Break.

Three of the Maids Head's team, Jonathan Brasnett, Andrew Shorthose and Rose Taylor ran the City of Norwich Half Marathon on 8 April and raised £188 in sponsorship for our charity of the year, Break. The sponsorship has been matched by the hotel, making a grand total of £376.

Sarah Bunn, Break's Fundraising Event Manager, joined us for the hotel's Vision and Values Employee Awards event on 23 April and presented certificates of appreciation and VIP supporter's badges to the running team.

Paul Dickson, the hotel's resident tour guide, was also presented with a VIP supporter's badge for raising £147 for Break, comprising donations given at the end of his Shardlake's Norwich tours, during English Tourism Week.

Cheers! Norfolk opticians roll out the barrels in centenary celebration

It was “Cheers!” 14,500 times over when representatives of children’s charity Break dropped in at Norfolk opticians Dipple & Conway.

Long-time supporters of Break, Dipple & Conway promised to donate 10p for every pint sold in the initial three-month run of Cat’s Eyes ale, brewed just in time for last year’s Norwich Beer Festival. And the tipple proved so popular with Norfolk’s real ale drinkers that the family firm found themselves pulling a cheque for £1,450. 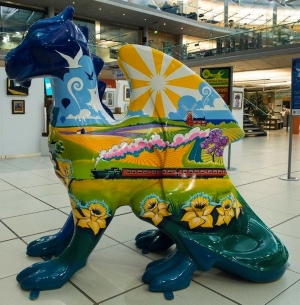 Following the success of GoGoGorillas! in 2013, Break Charity is firing up our City centre with a blaze of dragons, this summer, bringing visitors to Norwich, embracing creativity and ultimately raising funds with an auction at the end of the event.

GoGoDragons! is a Wild in Art event brought to Norwich by Break Charity, the  presenting partner Norwich BID, together with supporting partners Almary Green and Aspiration Europe.  Each of the 80 plus large dragon sculptures is sponsored by a local business, trust or group.  Seven sculptures are Heritage related dragons, painted and designed by artists and community groups.  The GoGoDragons! trail starts on 21st June and ends on 5th September 2015.