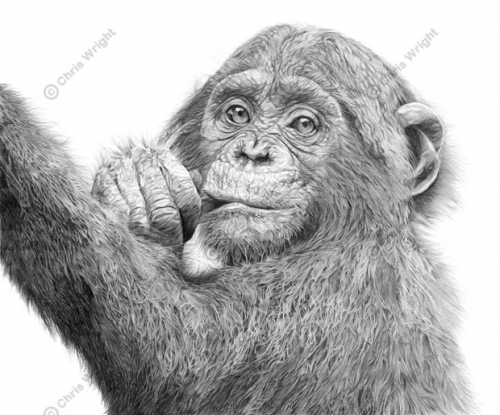 Chris Wright, is a self taught artist born and raised in Norfolk

In 2010 Chris was awarded a Gold Citation from The Wildlife Art Society International for his drawing of a Norfolk fawn. that same year, his work was Highly Commended by the David shepherd Wildlife Artist of the Year awards, since when he was a finalist again in 2011, and is once more in the running for the 2012 award. As well as being an award winning Artist, Chris is also a Senior Programmes Officer for the Born Free Foundation and part of his commitments to protecting endangered species includes a percentage of his art profits going to Born Free's project work to help keep wildlife where it belongs - in the wild.

When did you realise Chris that you had a natural talent for art?

I spent the vast majority of my early childhood doing one of three things: playing or watching football; looking for animals in my garden; and drawing disney cartoons. A couple of my teachers at Primary School were very encouraging when they saw what I was drawing and my grandmother was a constant artistic inspiration, thanks to her own love of and affinity for painting. I think the first time I realised i might be quite good was when I won First Prize in a school competition to design a poster, discouraging people from littering in Holt. I guess that could have been the spark for my dual career in environmental campaigning and art!

Tell us a little about your work with the Born Free Foundation?

I've been working for Born Free for 6 years next month, currently as Senior Programmes Officer. Our charity, founded by Virginia McKenna OBE who played the part of Joy Adamson in the global hit film "Born Free", firmly believes that wild animals belong in the wild. We campaign against exploitation and abuse of animals in captivity, such as circuses, zoos and dolphinaria, whilst also promoting and supporting the conservation of wildlife in its natural habitat. My role has included several and varied responsibilities, not least coordinating logistics when we undertake the rescue and international relocation of captive big cats to sanctuaries better able to meet their welfare needs. In my 6 years, I've been involved in the rescue and relocation of 11 lions and 5 leopards. The other focus of my work at present, is the conservation of tigers, where we are helping Indian campaign groups to engage rural communities in protecting the few wild tigers that remain.

Throughout your career which animal has had the most influence on your work?

From a very personal perspective, the two spaniels with whom I grew up, had a profoundly positive effect on me, and sparked my appreciation of the importance of respecting animals. More recently, my experience of seeing mountain gorillas in the wild in Uganda in 1997 remains my most thrilling wildlife encounter to date and more recently still, in the last few years, tigers have become an increasingly great influence on my work, and my outlook. They're simply magnificent.

Have you had any encounters with animals which have been a bit too close for comfort?

I have had many hair-raising encounters with wild animals, though none where I felt in real danger. Being in the presence of two silverback gorillas and their family, no more than 5 metres away, on their patch, is humbling. Stumbling across an elephant on foot crossing dense savannah vegetation in Kenya was, thankfully, no more than a shock at the time, but I do remember it terrifying me to think how easily such a huge animal could remain undetected until we were virtually on top of it. Undertaking a foot patrol with anti-poaching rangers in India, armed only with my camera, was an experience - especially when we discovered a freshly killed sambar carcass and tiger pug marks. But no tiger, to my relief! The most unpleasant close encounters - and far too close for comfort - have usually been with cockroaches, hand-sized spiders and leeches getting into places where they shouldn't!

Which is your favourite country to visit and why?

Tough question, Simon!  have a soft spot for Nigeria, having spent some of the toughest, but also most rewarding, months of my life there. The people I met were so welcoming and the rain forests of Cross River State, truly magical. Purely for the food and the language, I'd have to say Italy!

And finally Chris, which is your favourite place in Norfolk and why?

I have three favourite places in Norfolk: my parents' garden near Thornage where I spent many a happy hour as a child and where I love to relax with my family; Carrow Road, despite the bad games outweighing the good!; and the third place is a toss-up between the Hunny Bell pub in Hunworth and Weybourne beach. I went to both on my first date with Rebecca, who's now my wife.

To find out more about Chris and his work please visit www.cwright.co.uk

Concept Carpets Ltd (Blinds,Beds)
We invite you to visit our Showroom at 17 Penfold Street in the market town of Aylsham, where you will find 100's of samples to choose from, whether you are looking for carpets, vinyls, wood laminates  or blinds, beds, awnings and flyscreens. ...
Explore

Raveningham Gardens & Tea Room
Situated nearby to Loddon and Beccles our gardens surround Raveningham Hall, home to Sir Nicholas and Lady Bacon (and home to the Bacon family since 1735). Enjoy the beauty of our varied and ever-changing floral seasons. The Gardens are set out as ...
Explore