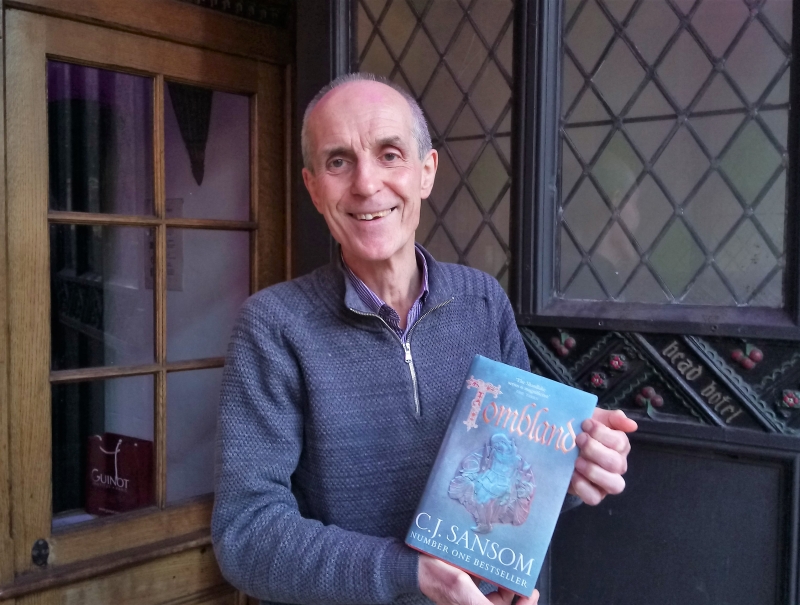 ‘Matthew Shardlake’ (Paul Dickson) and Maids Head Hotel General Manager, Christine Malcolm unveiled a plaque outside the hotel on Friday, August 2 to celebrate the Maids Head appearing in CJ Sansom’s best-selling novel Tombland.
Tombland is the seventh in CJ Sansom’s series of historical novels featuring Tudor lawyer Matthew Shardlake. In the book, he heads to Norwich to look into the circumstances of a horrific murder and stays at the Maids Head, before getting engulfed in Kett’s Rebellion in the summer of 1549.
“We have been offering a special Shardlake’s Norwich package since February,” said Christine Malcolm. “Guests on the package are given a copy of Tombland and have the option of booking a Shardlake tour with our resident tour guide, Paul Dickson.”
“The package has proved very popular, with Shardlake fans heading to Norwich from all over the UK, “ continued Christine. “We have even had visitors from Norway who love the series. It’s the first visit to Norwich for many of our Shardlake guests and the feedback that we get is that they love the city and can’t wait to return.” 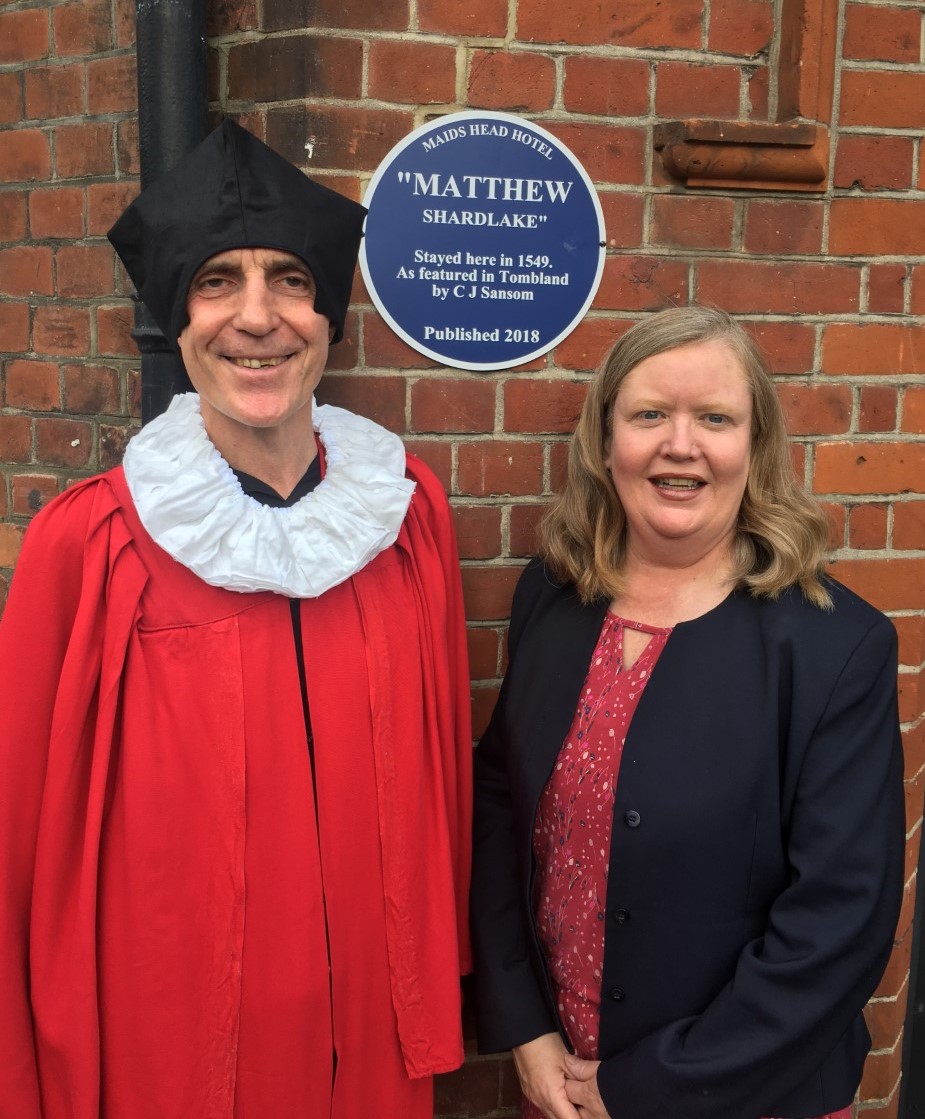 “Our plaque, celebrating Matthew Shardlake’s residence at the hotel, is already proving a good talking point, with guests taking selfies as a reminder of their stay.”
Paul Dickson added: “As well as taking Maids Head guests on my Shardlake’s Norwich tour, I offer a series a public bookable tours. People enjoy discovering Kett’s Heights, seeing the remains of Kett’s headquarters, St Michael’s Chapel, and taking in the fabulous view of Norwich and discussing the story of the rebellion.”
“My Shardlake costume, which was made by Penny Knee of the Paston Heritage Society, had its first outing on my Norfolk Day tour. It really added to the whole experience and drew lots of ‘second looks’ from drivers on the inner ring road and Kett’s Hill.”
For more information about the Maids Head Hotel’s Shardlake package see www.maidsheadhotel.co.uk.
For more information about the Shardlake’s Norwich tour see www.pauldicksontours.co.uk. 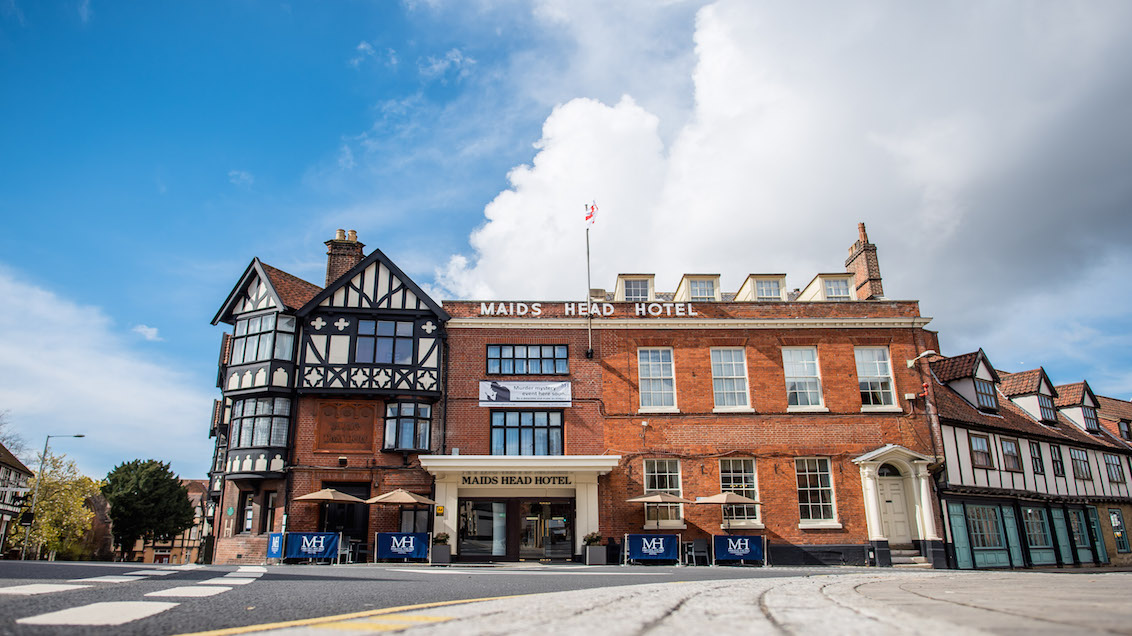 The Maids Head Hotel claims to be the oldest hotel in the UK, based on the site being used for hospitality from the end of the 11th century when the first Norman Bishop of Norwich, Herbert de Losinga had his initial palace there.
An inn on the site, the Murtel Fish, is mentioned in court records in 1287. The name, the Maids Head, first appears in a Paston letter, dated 22 November 1472.
Several legends associate the hotel with Kett’s Rebellion. Royal commanders, the Marquis of Northampton and the Earl of Warwick are said to have had breakfast at the Maids Head before their respective battles. Robert and William Kett are thought to have used the hotel as their Norwich headquarters after the defeat of the Marquis of Northampton at the Battle of Palace Plain.
Tweet
Published in News from Local Businesses
Tagged under

Anglia Karting Centre
Based in the heart of Norfolk, on the outskirts of Swaffham, Anglia Karting Centre has two outdoor race tracks which can be combined to make a 1030 meter, adrenaline fuelled, day of exciting racing.   We can cater for adults and junior ...
Explore

Naked Marketing
Stripped down and straight-talking creative marketing Naked is a creative marketing agency who since 2002 has believed that professional quality design and marketing shouldn’t be out of reach for businesses with smaller budgets. Specialising in ...
Explore CJS Plastering Norfolk Ltd
CJS Plastering is owned by Chris Sweeney and specialises in quality finishes and a thoughtful, friendly service where our main aim is your satisfaction. We have 30 years experience in all aspects of plastering and rendering and produce work to ...
Explore