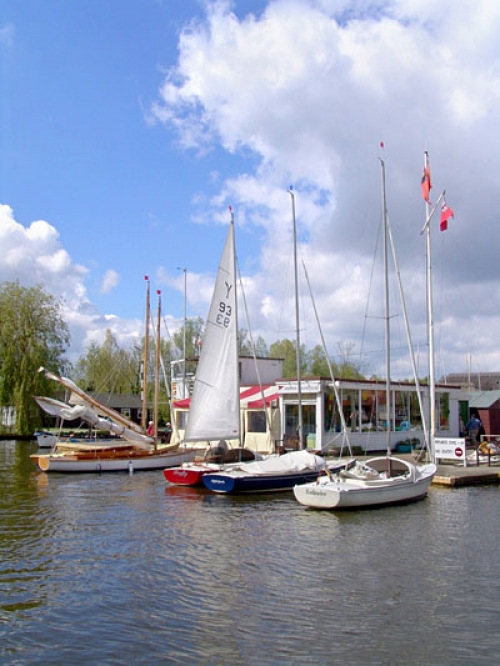 What’s in a name? Wroxham is not really Wroxham, nor is it really a town. But when you include Hoveton, which is situated where most people think is Wroxham, then it becomes just about big enough to become a town. But that’s only because of the several retail outlets of the legendary Roys of Wroxham, which is actually located in the dead centre of Hoveton.

Confused? Well at least the old British Rail got it right when it called the railway station ‘Hoveton and Wroxham’, one of the few towns in Norfolk actually still to have a train service.

An explanation, while necessary, is simple. The town is bisected by the upper reaches of the attractive river Bure, and a narrow bridge separates Hoveton on the north side from the parish of Wroxham on the south, or Norwich, side. And while most of Wroxham is residential, it won the branding for the district because of beautiful Wroxham Broad, a lake that is both a local sailing centre and a favourite overnight stop for those hiring yachts and cruisers for a holiday on the 200 miles of waterways that are one of the county’s prime attractions.

Wroxham used to be called the “Queen of the Broads’, but that title is now the name of a 78 foot double decker all-weather vessel that carries up to 140 passengers on trips down the Bure to the village of Horning passing through several broads. While the tourists enjoy a cup of coffee or something stronger, those fishing for carp haul in their lines, while sailors tacking up the narrow parts of the river curse their luck.

The ‘Queen’, and various other tourist attractions, including a Mississipi replica paddle steamer, cannot pass under Wroxham bridge. Some of those hiring holiday craft experience difficulties also, providing an ongoing and occasionally amusing spectacle for those maintaining observation from the garden of a nearby public house.

But for landlubbers and those wishing to explore upstream, there is another attraction – the Bure Valley Railway. This is one of the best of its kind in the country. The 15-inch gauge railway runs for 9 miles to the historic market town of Aylsham, tracking the river through rolling countryside with stops at Coltishall and Brampton.

This is a proper and well-maintained railway, its rolling stock and steam and diesel locomotives maintained by a small professional staff, and a large number of enthusiastic volunteers. You do not need to be a railway enthusiast to enjoy the journey and to talk to the drivers and guards, but if you are an enthusiast the shops at both ends contain much of historical interest. An alternative to the rail trip for those who seek exercise is to cycle along the track that runs beside the railway line for the full length of the track.

On the edge of Hoveton on the Tunstead Road is one of Norfolk's family attractions, Wroxham Barns which incorporates a Junior Farm, Funfair, Mini Golf as well as a range of craft shops and indepedent retailers. Back in Wroxham, or rather Hoveton, there is Roys. Roys sells just about everything. Those coming to Norfolk for a holiday on the Broads or in a village close to Wroxham should not even contemplate bringing their own groceries or stopping at Tesco on the way. They will find good quality and value at Roys. Some Norfolk people travel from miles away to shop at Roys, for everything from clothing and other fashion items to household goods, electrical equipment, wine and spirits to normal supermarket items.

Roys is one of Norfolk’s oldest businesses, founded by two brothers, Alfred and Arnold Roy in Coltishall in 1895. Three years later they opened a second store in Hoveton to cater to the growing popularity of family holidays on the Norfolk Broads. Between the two world wars it became so successful in catering for both the holiday and Norfolk trade that it won a competition to become the “World’s Largest Village Store”, an epithet that has stuck and never been challenged.

Upon the death of the Roy brothers in the early fifties the business passed to Alfred’s children – Fred, Peter, Paul and Elizabeth. The third generation of the family now run the business, using modern technology but maintaining the tradition. Tesco. Sainsbury and Morrison have made inroads into many Norfolk towns, but not to Hoveton and Wroxham.