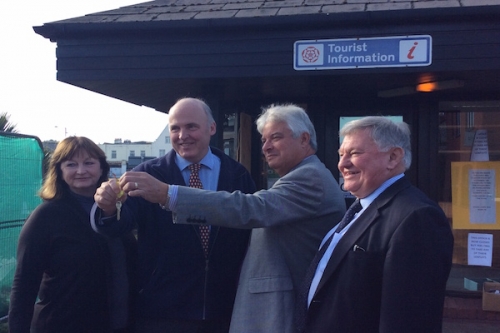 The handover paves the way for a newly redeveloped TIC and toilet facilities and improved opening hours and has offered NNR the opportunity to shape how local services are run.

NNR submitted a Localism Act Expression of Interest to the Council to provide and manage the Sheringham Tourist Information Centre and the public toilets at Station Approach, Sheringham.

The transfer was dependent on a successful Coastal Communities Grant bid by the NNR for £450,000 for a wider development of the site at Sheringham, which was awarded in January 2015.

It is expected that the new TIC will be run by railway staff and will open throughout the year.

Temporary toilets have been installed on Station Approach car park and will be available for the duration of the project (subject to opening hours).

Cllr. Tom FitzPatrick, North Norfolk District Council Leader, said: “Handing over the Tourist Information Centre and Station Approach toilets in Sheringham to North Norfolk Railway follows the successful transfer of Wells Tourist Information Centre to Wells Maltings Trust.  Both transfers indicate how the Council is willing to work with local people and organisations to ensure important and well-used services and facilities continue to be provided in the future.”

Trevor Eady, General Manager for North Norfolk Railway, said:  “We welcome the opportunity to enhance the facilities for both the North Norfolk Railway and Sheringham itself. Work will start immediately to ensure the new facilities, which will include a new shop for the Railway, will be available from April 2016. The project will also see the buffet on the station doubled in size to help provide better facilities for the growing number of passengers (2015 161,000).”

North Norfolk Holiday Dogs
Do you need someone to look after your dog, maybe you’ve got a long day, an evening out or are off on holiday? For years we have been looking after our friends dogs,in our home, when they are away providing the home comforts they are used to. I ...
Explore 3 Hall Close
Just a mile from the sea, on the stunning North Norfolk coast, this lovely large holiday cottage, built circa 1890 in traditional red brick and carrstone, is furnished and equipped to a high standard throughout. Situated at the end of a ...
Explore