Ride for Life cyclists raise a staggering £50,000 for EACH 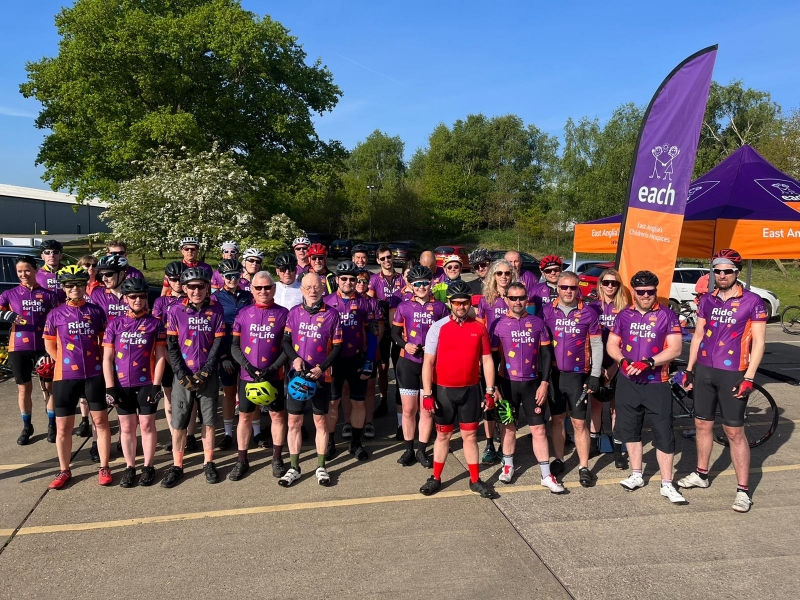 Steely cyclists saddled up for a bumper biking challenge and raised more than £50,000 for East Anglia’s Children’s Hospices (EACH).

The charity’s popular Ride for Life event took place last weekend, with 32 people pedalling 200 miles through the Norfolk, Suffolk and Cambridgeshire countryside. Many more signed up for a one-day, 70-mile package, with 39 riding on Friday and 34 on both Saturday and Sunday. Between them, they raised a staggering £51,225 for EACH, which supports families and cares for children and young people with life-threatening conditions across East Anglia.

Events fundraiser Hannah Forbester said: “It was a huge success. “Everything went smoothly and everyone seemed to enjoy the experience. In terms of the amount raised, it’s an outstanding total. We were on around £45,000 by close of play on Thursday, so a further £6,000 came in while the cyclists were in action on Friday, Saturday and Sunday. We couldn’t be happier and there’s still more sponsorship money to come, so that figure will grow even more. We were also thrilled to get such high numbers taking part. Everyone bonded and enjoyed sharing the experience together. Little groups formed, depending on pace, and there was plenty of encouragement for each other along the way. People made a point of clapping others as they arrived at the rest stops. We’ve had lots of positive feedback since and I know people who did the three-day challenge enjoyed cycling alongside those taking part on individual days. They said it gave them a real injection of energy.”

The three-day package started and finished at Richard Johnston Ltd, in Snetterton. It took cyclists from Norfolk to Ipswich and then onto Milton, in Cambridgeshire, before returning to Snetterton. Cyclists were in the saddle for approximately seven to eight hours a day and dinner, bed and breakfast and luggage transfers were included. The one-day options featured rides from Snetterton to Ipswich, from Ipswich to Milton and from Milton to Snetterton respectively.

All cyclists benefited from a fully supported route, first aid assistance, a back-up vehicle for the full journey, a kit list and training information, daily route information cards, mechanical support, refreshments and lunches along the route, fundraising help and support and a medal.

Hannah said that in addition to the cyclists, she was grateful to headline sponsor Richard Johnston Ltd, cycling events company Chapeau and charity Rapid Relief.  “There are lots of people to thank, very much including Richard Johnston Ltd,” she said. “Their continued support of this event is invaluable and it’s a great place to start and finish the event. Chapeau managed the logistical side of things and were fantastic  throughout. They dealt with things like the route, hotels and mapping out the rest stops to ensure everything went seamlessly. It was a massive challenge for those who took part but they got lots of support and really appreciated the hard work of the Chapeau team. Rapid Relief also did an amazing job, supplying food at the rest stops. They provided exactly what the riders needed, including beautiful sandwiches, pasta, salad, energy bars and hot and cold drinks. It was all free and very gratefully received.”

This year’s event took place in memory of Richard Johnston, who died in December 2018. Through his business, Richard was a dedicated long-term sponsor and supporter of Ride for Life. Three of his daughters, Helen, Gail and Catherine, were among those taking part and between them they raised an impressive £8,000. Also cycling were Henry and Jane Wright, who were riding in memory of son Douglas. The four-year-old had more than a year of treatment after being diagnosed with neuroblastoma - a rare type of cancer that mostly affects babies and young children. EACH provided end-of-life care before his death in February 2018.

The charity then supported Jane, Henry and daughter Clara (then aged seven) and they said signing up was their way of saying thank you – a form of “payback”. “People enjoyed hearing what we told them about EACH,” added Hannah. “It was nice to help raise awareness and tell people how absolutely vital money like this, in terms of allowing us to continue our work. There was a lovely touch at Milton, where the nurses came out to give the cyclists a clap and words of encouragement.”

Last modified on Sunday, 15 May 2022 18:52
Tweet
Published in Norfolk Charities & Fundraisers
Tagged under