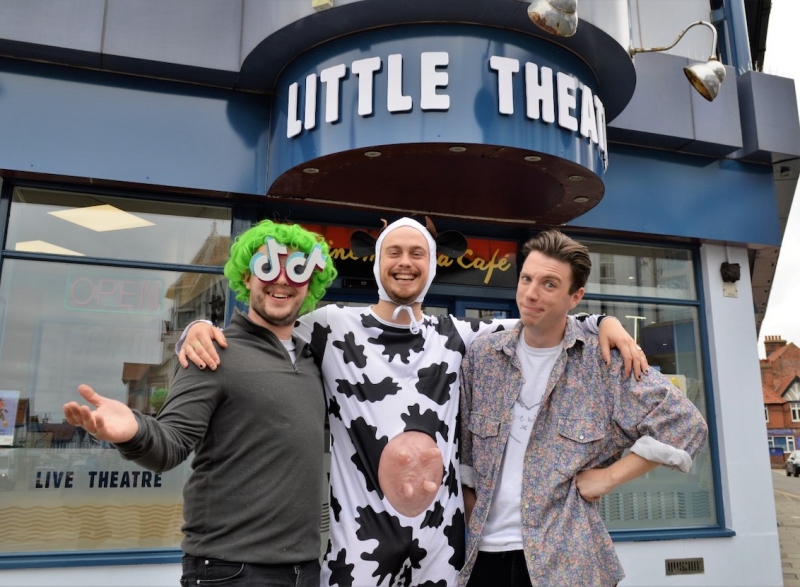 The lights are burning bright again at Sheringham’s stage and screen.  With the Autumn programme well underway, the Little Theatre has an amazing array of attractions to look forward to.

Our Panto will celebrate the end of this very long year with no less than twenty afternoon performances between 21st and 31st December when you can join Jack on his adventures up the Beanstalk.  Whatever else will be in short supply this Christmas, it won’t be fun and laughter in the Little Theatre’s show!  But with social distancing still in place in the auditorium there will be big gaps in the seats, so it’s best to book early to avoid disappointment.

More events for the youngsters come in half-term week.  The multi-talented Jez Bond brings his blend of comedy and magic to the Little Theatre with his Just Mucking About Show, a special spooky Halloween edition on 30th October, and just before that on 28th October the well-qualified Daisy Winchester hosts an all-day Halloween Workshop for 6 to 16 year-olds.  What better place for Drama tuition than in a real theatre?

On Tuesday evenings in November enjoy our selection of films starting with Summerland  on 2nd, Nobody on 9th, and In the Heights on 16th.  An additional bonus is a free screening of David Attenborough’s ‘A Life on Our Planet’ on Thursday 11th November at 7.30pm.

A huge choice of live music has been laid on so there should be something for everyone’s taste.  With over 30 albums and 15 books to his name, well-known British folk singer Richard Digance invites you to spend an evening in his company on 12th November.

How will the Rat Pack Singers recall the groovy decade of the 1960s?  You can find out on 26th November when there are bound to be some of your old favourites.  On 5th December you will have the first chance in two years to sing along with your best-loved Christmas carols and songs when the Sheringham and Cromer Choral Society take over the Little Theatre’s stage for the Sunday afternoon.

More entertainment is provided by the local Little Theatre Players as they revive Radio Fun with a brand new selection of sketches, songs and poems on 19th and 20th November.

At the beginning of December, the satellite dish will bring the silver screen to life with the very best from the world of culture.  The ballet classic of The Nutcracker by the full company of the Royal Opera House is screened on the 9th.  The English Chamber Orchestra with a stellar line-up of soloists perform Handel’s Messiah on the 11th.  This short series of screenings closes on 15th with Puccini’s best loved opera, Tosca.

Contemporary Variety will be given the festive flavour on 18th December by Donimo and Monroe for a truly surprising cocktail of comedy, magic and music.  Christmas wouldn’t be Christmas without a healthy dose of the Albion Band.  They will give their unique guided tour of British Christmas customs on 20th December.

On our website you will also find full booking details for the county-wide tour of Rider Spoke from the Norfolk and Norwich Festival which comes to Sheringham for the first two weekends in November.  Bring your own or borrow their bike, or you can simply walk if you prefer, and they will lend you a smart phone for a truly memorable experience of Sheringham with a narrated tour with gentle music.

You can always rely on Sheringham Little Theatre to bring you the best of the old and the best of the new.   All tickets can be booked online at www.sheringhamlittletheatre.com More in this category: « Get into Golf with Golf Tuition at Barnham Broom Brand new play "Under Lockdown in Milk Wood" comes to Westacre Theatre »
back to top