Meet some of the Artists behind Break's GoGoDiscover 2021 Trail 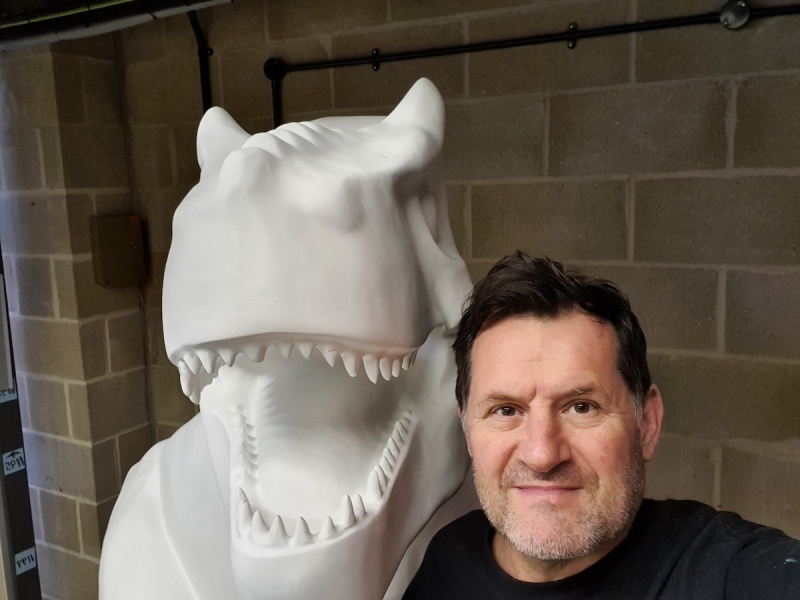 With thousands of people already coming up close to Break’s GoGoDiscover 21 T.rex, which are brightening up Norwich’s streets this summer and helping Break raise funds so that it continue to provide lifelong support to children and young people in care, on the edge of care or leaving care, meet some of the artists who designed and decorated some of the colossal sculptures.

Aylsham-based artist, Mik Richardson, designed Afternoon Tea-Rex, sponsored by and located at Chantry Place. This is the fourth time Mik has worked on a Break sculpture trail, with his previous pieces raising over £68,000 for the East Anglian children’s charity. Although Mik has painted over 100 sculptures for over 30 trails across the UK, including a special commission for Blue Peter and a piece brought by Ed Sheeran, Afternoon Tea-Rex is the biggest sculpture he has worked on – at 2 metres tall. Taking roughly 10 days to decorate, Mik used acrylic and emulsion paints to bring the tea-riffic T. Rex to life, and added a real tea tray and cake stand. “Rex is a waiter, but with his tiny little arms, he has to balance items on his head and back”, said Mik, “so don’t even consider asking him to pick up that dropped spoon from the floor.” Mik wasn’t always an artist, in fact he spent 27 years as an avionics engineer in the RAF.

Sally Adams is a former London prop maker, who now lives in Norwich, and is an ardent Break supporter. She is already working on the 2022 trail for Break and has decorated two T.rex for the 2021 trail; Rex, sponsored by Jarrolds, and Lost Holmes, sponsored by Aspiration Europe. Sally commented: "Virtually everything we know about dinosaurs comes from their enormous bones, so Rex is a giant dog and has run off with one of the bones! Inspiration for Lost Holmes was taken from two works by Arthur Conan-Doyle, ‘Lost Worlds’ and, of course, ‘Sherlock.” Other work on public display by Sally include the stainless-steel dragonfly at How Hill, the grasshopper at Greshams at Holt and the Police HQ Memorial Fountain at Wymondham. 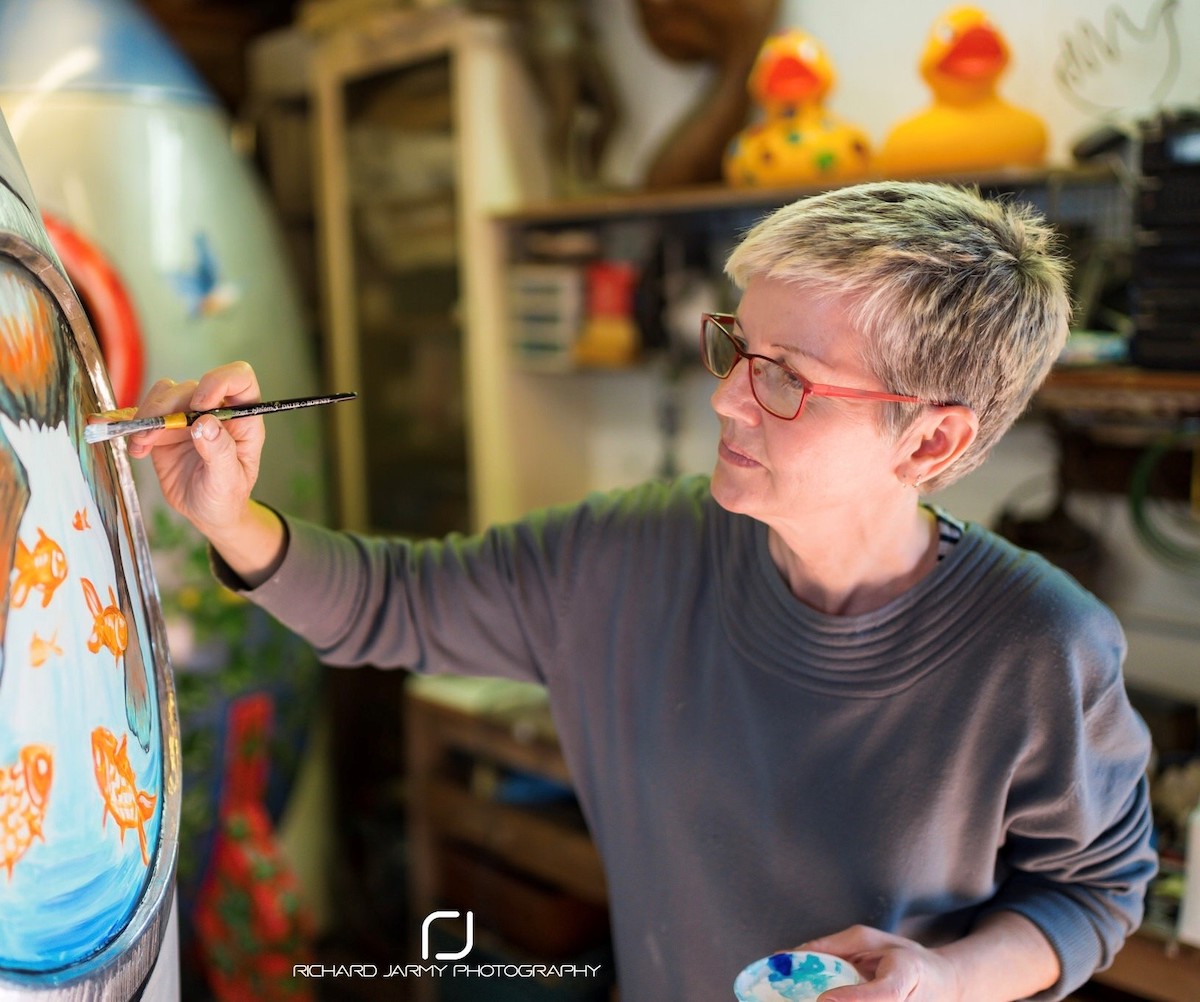 Ryan Newell is a freelance illustrator and animator based in Norwich, working on everything from pet portraits to vehicle graphics. Previously involved with three Break trails, for GoGoDiscover 2021, Ryan designed Where’s Rexy, sponsored by Riverside Entertainment, with the theme of retro computer games. Decorated with acrylics, the work took Ryan about six weeks to complete. Ryan said: “It’s a large piece, but I've painted an elephant and a dragon before, so I wasn’t intimidated by the scale.”

Sophie Li-Rocchi is Head of Art at Gresham Prep school and this year has designed and decorated two T.rex - Dino Hunter and SNAP! “SNAP!, sponsored by Castle Quarter, is based on Norwich’s famous medieval dragon, who would entertain the crowds at St George’s Day celebrations and at processions held for the inauguration of new Mayors”, explained Sophie. “The tradition still exists today at the annual Lord Mayors Procession. Some of the original dragons are kept in Norwich Castle Museum, so I was able to base my design on these. Dino Hunter is ready for an adventure - he has his binoculars and all the equipment he could possibly need to hunt for dinosaurs on the streets of Norwich. Sponsored by First Eastern Counties Buses, other dinosaur hunters should look out for the bus ticket and bus map in the Dino Hunter design.” Fitting the work around teaching commitments, Sophie worked on the sculptures for over seven months. 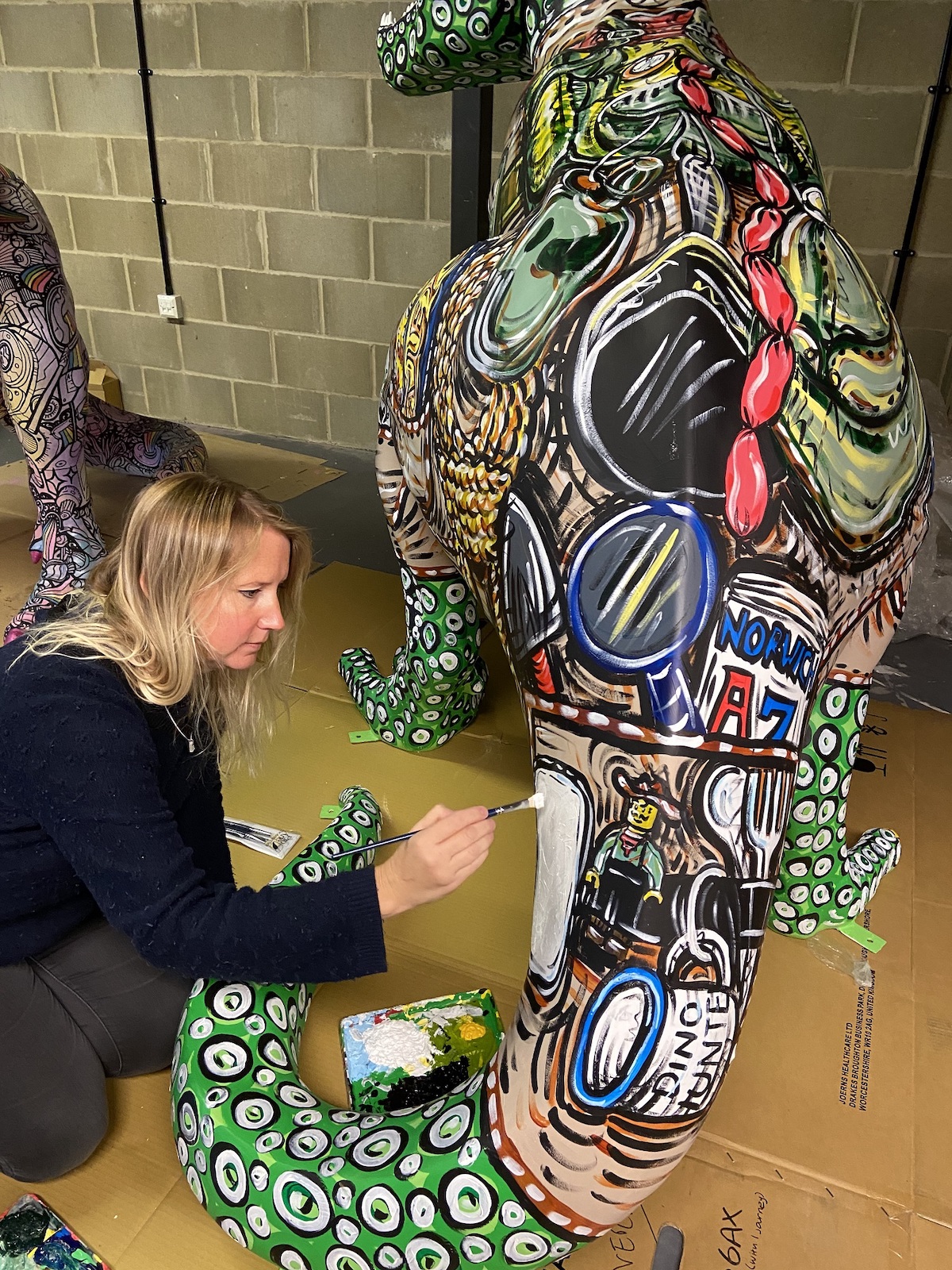 Tracey Warnes, GoGoDiscover Art Co-ordinator at Break, said: “The artists have done an amazing job creating these unique and beautiful works of art. The feedback has been brilliant and everyone is loving seeing the T.rex around Norwich. The artists are such a vital part of this event - from coming up with ideas, working with sponsors and decorating the sculptures, and then helping us raise funds for Break at auction. We are now on the lookout for artists to be involved in 2022 with even more T.rex and Steppe Mammoth sculptures being unleashed around Norfolk. We’d love to hear from artists who think outside the box to create designs which will make people smile.”

Artists interested in being involved with GoGoDiscover can download an artist information pack and submission form via this link  https://www.break-charity.org/gogodiscover-2022/

Running from now until Saturday 11th September 2021, the GoGoDiscover charity sculpture trail is delivered by East Anglian based children’s charity Break, in partnership with Wild in Art. The presenting partners of GoGoDiscover 2021 are Norwich BID and Chantry Place.

While the trail is free, people who have enjoyed the sculptures can donate to Break via text or on the website, so that Break can continue to transform futures and change the lives of vulnerable children and young people across the region. For more information about Break visit break-charity.org Diamond Life Holistic Centre
Balance your body, mind and soul with a range of holistic and organic therapies As a group of holistic therapists who are passionate about health, well-being and self development. We enjoy Creating health and well-being for all our clients.  ...
Explore More in this category: « Phil Soanes running the London Marathon in aid of EAAA Blood is now available on every air ambulance mission »
back to top