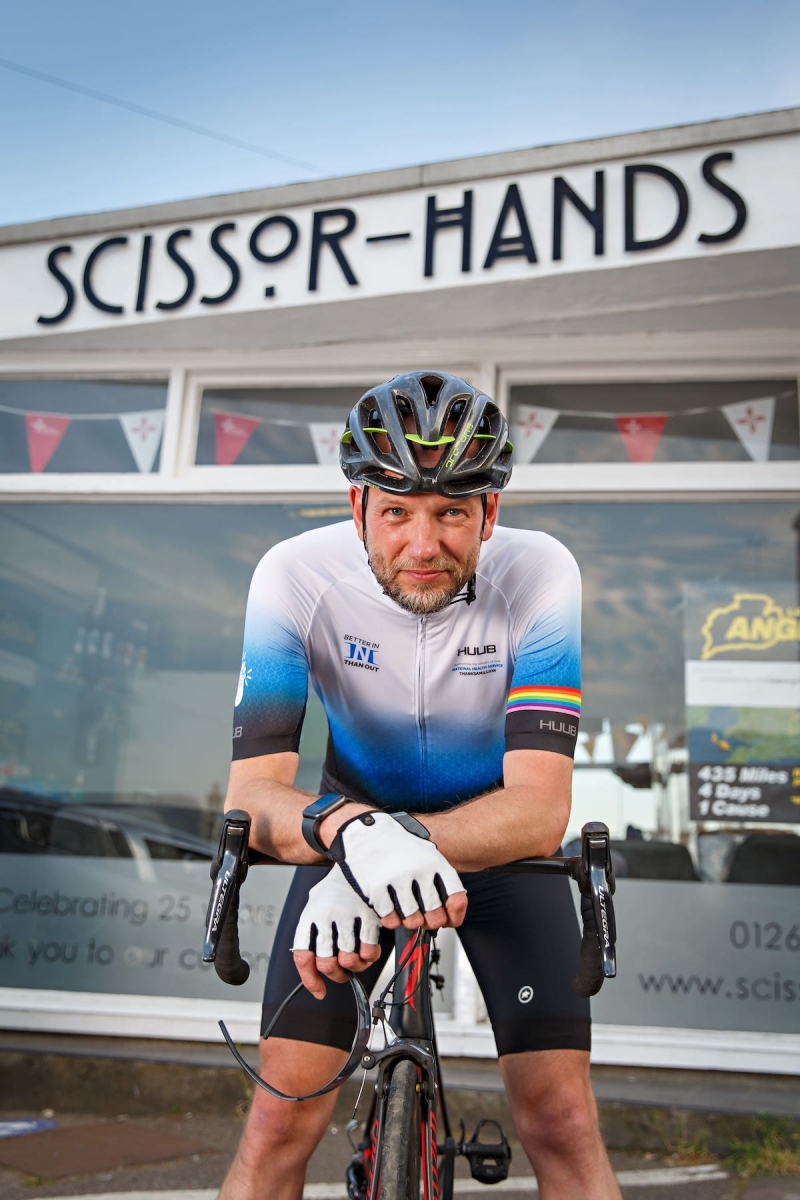 Chris Marshall, aged 49, is a barber from Sheringham and father of two. In May last year Chris was involved in a life-threatening collision with a car near Cromer Golf Club, while he was out training for a 100-mile cycle challenge. When Chris’s wife was first notified about the accident, she was told Chris wasn’t likely to survive.

The accident happened around 11:30am on 12 May 2020. A team from the East Anglian Air Ambulance was tasked at 11:39am to provide critical care at the scene, landing on the Cromer Golf Club car park. The EAAA team worked for over an hour to deliver the enhanced pre-hospital care interventions required to give Chris a fighting chance. These included performing a thoracostomy, a procedure to release air to treat a collapsed lung, and anaesthetising Chris to take control of his breathing.

Chris had a suspected head injury and had broken several bones in his body. His injuries were classed as life-threatening and without the enhanced interventions of the air ambulance team, he would not have made it to hospital.

Fortunately, the team were able to stabilise Chris enough to be moved and he was flown to the major trauma centre at Addenbrooke’s for specialist treatment. Chris’ injuries were extensive and included three bleeds on the brain, several spinal fractures, including some damage to his spinal cord, a fractured pelvis, broken left shoulder blade, hip and ankle and several broken ribs on his right side. He has since suffered double vision, slurred speech and had to learn to walk and talk again. Chris also has nerve damage which still prevents him from fully lifting his arms up.

Despite these severe injuries, Chris has shown true grit and determination to recover and this August is planning to cycle 435 miles, known as the Adrian Flux Lap of Anglia, to help raise vital funds for EAAA. Chris was also recently voted EAAA’s Most Inspirational Patient for 2021 for his inspiring recovery and attitude to life.

Chris said: “I’m still not 100% but I know how close I came to dying and I’m just so, so glad that I didn’t and so grateful to the East Anglian Air Ambulance that they were there to save my life. Having spoken to the team who treated me, there’s no way the ambulance service paramedics would have been able to deliver the enhanced level of care that the air ambulance team did, which saved me, so without them there’s no way I’d be here now to see my kids grow up.

“I’ve still got a long way to go but the Lap of Anglia is a really big target of mine – I’ve never done that much back-to-back to cycling before, and on day one we will go past the site of the incident in Cromer, which will be tough, but I’ll be with about 70 other cyclists who are all cycling for the same cause, and that will get me through it. I’ll never cycle on my own ever again though and would urge everyone to be exceptionally careful around cyclists on the road. Just a few seconds can change someone’s life forever.”

EAAA Doctor Chris Chadwick, who treated Chris, added: "We could tell as soon as we arrived on scene that our patient, a male cyclist, was seriously injured. We worked quickly despite the hot day in full PPE to deliver an emergency anaesthetic and other critical care interventions. With the help of all the emergency services on scene, we were soon airborne and flying to the major trauma centre at Addenbrooke’s Hospital. We checked for updates over the next few days and hoped for the best but we knew he had extensive and serious injuries.

“I can’t tell you how glad we were to speak to Chris and his family over Teams many months later to hear about his incredible recovery and his indomitable spirit, supported by our very special Aftercare nurses. Chris thoroughly deserves his inspirational patient award and we look forward to cheering him on as he gets back on his bike and taking on his challenge to support East Anglian Air Ambulance in August." More in this category: « 24/7 air ambulance flying starts 30 June, becoming first in East of England The Rowan Project »
back to top