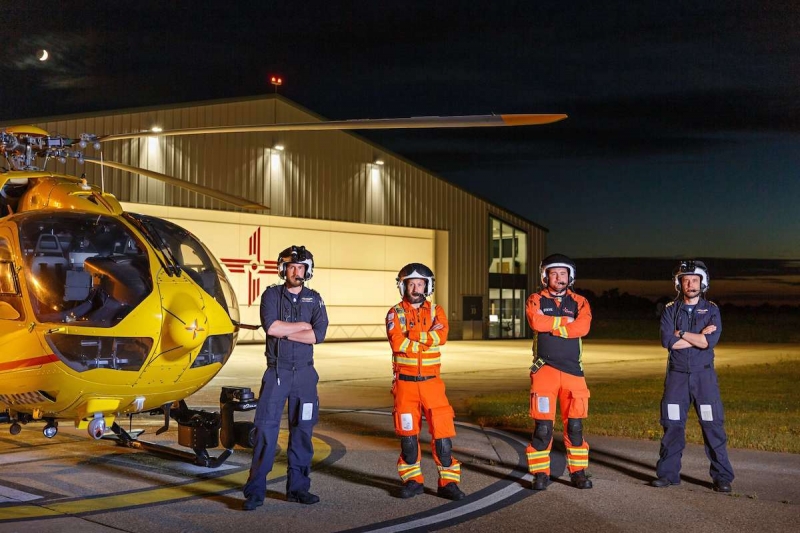 Tonight (Wednesday 30 June) is a landmark moment for East Anglian Air Ambulance (EAAA) and the provision of emergency critical care in the region, as the charity starts flying 24/7 for the very first time.

The gap between 1:30 am and 7am where there has been no helicopter emergency medical service (HEMS) coverage in the region will now be closed, as EAAA becomes the first air ambulance in the East of England to fly 24 hours a day.

Becoming a 24/7 service for East Anglia has been a long-term ambition of the charity, with the initial research for expanding to a 24/7 operation taking place four years ago. Since then, EAAA has taken gradual steps towards achieving this ambition, which importantly included raising an extra million pounds a year to fund the additional operating hours, increasing its car cover to 24/7, building a new operational base and now 24/7 flying.

EAAA has two critical care teams, Anglia One and Anglia Two, which operate from Norwich and Cambridge respectively to take the A and E department to the patient, by air or by car, wherever they may be in Bedfordshire, Cambridgeshire, Suffolk or Norfolk. The highly skilled doctor and critical care paramedics have been operating 24/7 by rapid response vehicle since March 2020 and now that 24/7 service will be bolstered by a 24/7 helicopter operation, too, for the very first time.

By becoming a 24/7 service by air and by car, EAAA estimates it can be tasked around 600 more times a year, helping hundreds more patients in their hour of need. Last year, the crews were tasked more than 500 times at night by RRV alone, demonstrating the demand that exists overnight.

Matthew Jones, the recently appointed CEO of EAAA, said: “This is a huge moment for East Anglia and something that we, as a charity, have been working passionately towards for several years; to provide critical care to someone in a life-threatening or life-changing situation no matter what the time of day or night.

“To be about to fly 24 hours a day for the very first time, by providing two 12-hour helicopter shifts, is the last piece of the Mission 24/7 puzzle. However, we wouldn’t have been able to achieve any of this if it wasn’t for the incredible generosity of people throughout the region who have helped EAAA grow into the amazing lifeline that it is now.

“In just over 20 years East Anglian Air Ambulance has gone from operating just one day a week to becoming a really sophisticated 24/7 helicopter operation. That just would not have been possible without the people of East Anglia who have gone above and beyond in supporting this charity and keeping our crews flying, so that they can be there for someone to make what could be their last day into simply their worst day. We look forward to being able to fly to more patients in the early hours of the morning, where our teams have previously only been available by rapid response vehicle.”

By flying 24/7 from 30 June, EAAA will now be able to provide the same level of service by helicopter or by car 24 hours a day to patients in need like Chris Marshall, who was saved by the charity last year.