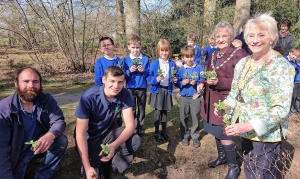 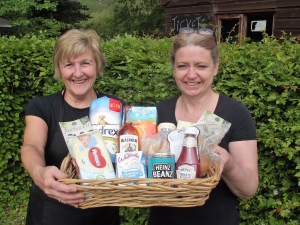 Fairhaven Woodland and Water Garden, at South Walsham, has opened a small provisions shop in its tearoom to provide 'essential essentials' for local residents and visitors on boating and self-catering holidays in the area.

Louise Rout, Fairhaven Garden Manager explained: “We were very sad when our village shop closed last September. Some villagers asked us if we were going to run a shop, but we don't have enough room. However when visitors on boating holidays came up from South Walsham Broad at Easter and asked if we sold bread or milk, we decided that we would experiment with a small range of 'essential essentials' for visitors on holiday and also our local residents. If demand grows, we can always expand the range and bring in items like cut ham." 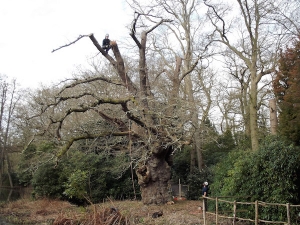 Fairhaven Woodland and Water Garden's ancient King Oak, believed to have been a sapling at the time of the Battle of Hastings and one of the oldest trees in Norfolk, has been given a 'trim' to ensure it's long-term health.

Four years ago, the King Oak's crown was suffering from die-back and was reduced in size to help stabilise the tree. The path was also moved away from the garden's champion tree to give it more breathing space. Visitors' feet were compacting the roots and suffocating the tree.

Matt Jordan, Fairhaven Garden's Head Forester explained: “We give the King Oak an annual health-check, along with regular visual inspections, looking for broken limbs and aggressive fungi. The tree has survived so long, because it was actively pollarded for many centuries and also grew next to a good supply of water. More recently, it has also responded well to the footpath being moved away from it's root system.” 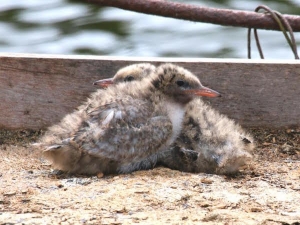 A new floating breeding platform for common terns was secured on Fairhaven Woodland and Water Garden’s broad today (March 27) at South Walsham. It was attached to posts that survive from an old 1960s installation, designed to deter waterskiing.
The platform comprises a 3m x 2m pallet and six large fruit juice barrels (for buoyancy) donated by Britvic, Norwich, along with two ‘air raid’ shelters, so that chicks can hide from aerial predators and a hinged ramp into the water. The ramp will take the weight of a chick, but not otters, to deter them from attacking.
Published in News from Local Businesses
Read more...
Wednesday, 08 April 2015 00:00 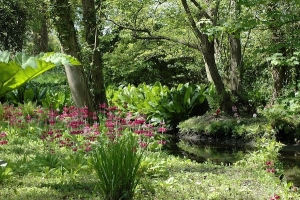 It’s Fairhaven Woodland and Water Garden’s 40th birthday this month and visitors are invited to share in the garden’s birthday cake on Wednesday, April 15 and join a 40th anniversary tour on Sunday, April 19 with George Debbage, Head Gardener from 1975-2007.

Lord Fairhaven, Chairman of the Fairhaven Garden Trust will be cutting the special cake on Wednesday, April 15 at 1pm. The birthday cake will be shared with visitors on the day. Lord Fairhaven will also officially open the new Hydrangea Path, which is part of the West Garden restoration, the key project to mark the 40th anniversary. The Hydrangea Path has been designed to add colour in the garden during the summer months.