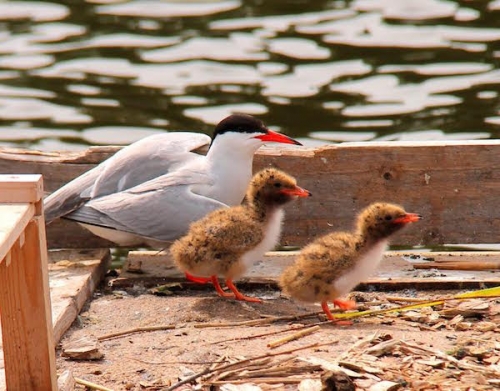 Photograph taken by taken by Trevor 'Tabs' Taberham, volunteer wildlife warden at Fairhaven
Nine common tern chicks, from four breeding pairs of adult birds, have hatched on the new floating breeding platform secured on Fairhaven Woodland and Water Garden’s broad at South Walsham. Last year one pair bred with two chicks fledging.
Trevor ‘Tabs’ Taberham, volunteer wildlife warden at Fairhaven Garden explained: “Two years ago, just after I started working her, five pairs of common terns tried to breed on the island in Fairhaven broad, but greylag geese wrecked the nests. So last year, we experimented with a single standard size pallet, attached to posts that are in middle of the broad. It attracted two pairs of common terns; one pair stayed to nest, three chicks fledged, but unfortunately one was taken by a Herring gull.”
“The new platform is much larger, comprising a 3m x 2m platform.  We included ‘air raid shelters’ and a hinged ramp into the water to help keep the birds safe. These features are being well used by the chicks. You plan these things and hope for a successful outcome, but it has turned out better than we could have imagined. The common terns are working together to feed the chicks. Two adults are always on the platform looking after the chicks, while the others go off fishing.”
“Two pairs of black headed gulls are also using the platform, they had their chicks a week before the terns, and appear to be getting on with their neighbours.”
“The common tern chicks will be on the platform for another three weeks, then their parents will teach then to fish for around 10 days, before heading off to West Africa. The fledged chicks will remain on the broad for the rest of the summer, fattening themselves up before they take the long flight to Africa as well.”
Fairhaven Garden’s daily boat trips (additional charge) take visitors past the common tern platform, so they can keep an eye on progress.
Fairhaven Woodland and Water Garden is at South Walsham, nine miles east of Norwich, signposted off A47 at B1140 junction, t. 01603 270449, This email address is being protected from spambots. You need JavaScript enabled to view it..uk, www.fairhavengarden.co.uk.
The garden is open daily all year 10am to 5pm (closed Christmas Day and closes 4pm during the winter), also open Wednesdays until 9pm until the end of August.  Garden entry is adult £6.75, concessions £6.15, child £3.85 (under 5 free). Free entry to tearoom, gift shop and plant sales.
There is wheelchair access throughout the garden, including a Sensory Garden and accessible boat trips (April to October, additional charge). Visitors requiring special facilities are advised to telephone in advance, mobility scooters available.
Dogs are welcome on leads; small charge to cover poop scoop. 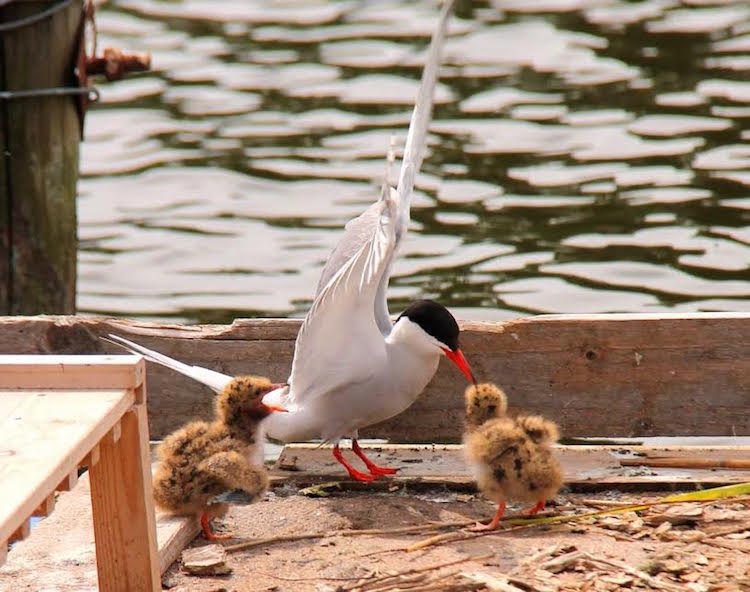 The Globe Trotter Bars
The Globe Trotter Bars offers affordable and professional bar hire around the Norfolk and Suffolk area. With years of experience both Seven and Amy are passionate about the hospitality industry and love to be involved in everyones special ...
Explore More in this category: « The Grove scoops national award New Massage Hut at The Grove offers the perfect retreat for all »
back to top