Dereham - Town for everyone 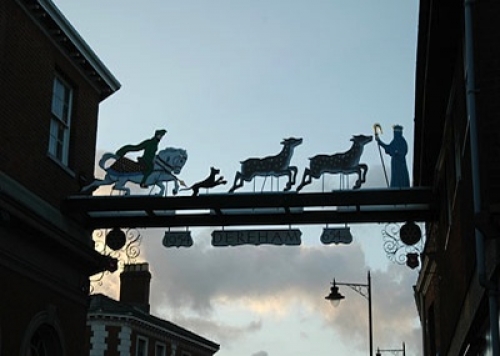 Once, if you were driving to Norwich or the Broads from the Midlands or the North you could not miss Dereham, in the dead centre of Norfolk. The A47 went straight through the middle of the place, and the chances were that you would be in a traffic jam and decide to take a break and explore this busy Georgian market town.

Now the probability is that you will pass it by, noticing perhaps just the sign to Dereham (also known as  East Dereham) . Those who live there know it as Dereham, a reference to the fact that in bygone times deer roamed the nearby woods and forests.

Dereham was once a significant industrial town, arguably the largest in Norfolk. Homes across Britain had Jentique furniture in their living rooms, possibly a Metamec clock, while their children almost certainly learnt creativity from Hobbies kits. All were once manufactured in Dereham, which also thrived as a major agricultural and service centre, and the home of Crane Fruehauf, a manufacturer of large trailers.

There is little to show for this history now, but Dereham is home to many successful small businesses, and still sustains a population of around 12,500, which makes it one of the county’s bigger towns. The town has always had a strong sense of community, and this is sustained today. It is also a strong administrative and services centre, providing the headquarters for the Breckland District Council.

Despite its industrial past, Dereham has strong literary roots. It was the birthplace in 1803 of George Borrow, the son of an Army recruiting officer and a farmer’s daughter. Young George did not opt for the Army, but set out to travel, and his many European journeys, uncommon in the early part of the 19th century, provided the basis for his many books, including The Bible in Spain, Lavengro, and The Romany Rye, about his time spent living with gypsies.

The celebrated poet and author William Cowper, creator of some of our best known hymns, spent his final years in Dereham, and is buried in the chapel of St Thomas of Canterbury at St Nicholas Church. It was in Dereham that he wrote his bleak poem, The Castaway.

Dereham also provided the foundation for the journalistic careers of a wave of young men in the the 1950s and 1960s. Those who cut their teeth covering the theatrics of Dereham Town Council and the misdemeanours before Dereham Magistrates included John Timpson, later to become the popular host of the BBC’s Today program; Colin Chapman, who became foreign editor of The Sunday Times, then BBC economics correspondent and later a senior executive at the Financial Times; Richard Wright, who became Old Bailey correspondent of the Daily Express; and Keith Skipper, much-loved Norfolk-based author and entertainer.

During this period a group of these young Dereham reporters worked with district youth officer Eddie Kitney to make the town’s War Memorial Hall a prime attraction for East Anglia’s young people. They did this by engaging top jazz groups, including those led by Chris Barber, Johnny Dankworth, Acker Bilk, Kenny Ball and Terry Lightfoot. Each concert was sold out, and to this day the WMH remains a centre for local attractions.

For the visitor, Dereham remains a good and inexpensive place from which to explore much of Norfolk. There are some good hotels, and any number of bed and breakfast establishments. There is also a small golf course that welcomes visitors, while the coast at Wells-next-the Sea and Holkham is a 35-45 minutes drive.

One of the main tourist attractions in the Town is the Mid Norfolk Railway , which is entirely run by volunteers and runs services between Dereham and Wymondham, with the long term aim to extend to Fakenham. The Mid-Norfolk Railway was established in 1995 with the aim of buying and restoring the disused Railway track between the market Towns of Dereham and Wymondham and with this now completed with a fleet of heritage diesel locos serving the two Towns, the long term aim is to now extend the line to serve Fakenham. The Railway also runs fairly regular commercial freight services. To find out more about the Mid Norfolk Railway please click here

Another nearby attraction is the Gressenhall Farm and Workhouse, the Museum of Norfolk life. Observing this building today, it is hard to realize that it was once a fearsome and forbidding building, in active use. In 1776 two local parishes bought what was then Chapel Farm to build what they termed “a house of industry” for the poor.

But in 1834, the Westminister government transformed it into a classic workhouse, where the conditions were so poor that even paupers would do almost everything to avoid being sent there. A system of classification separated men, women and children and work included breaking stones for the men and kitchen duties for the women, with the only benefits being healthcare and education. The Workhouse closed in 1948 and became a Museum in 1976.

Apart from this grim reminder of Norfolk past, there are many other more cheerful attractions particularly for children including a traditional working farm where you can get close up to rare breed animals, take a cart ride and have a go at milking. For details of Gressenhall Farm and Workhouse please click here More in this category: « Docking Market Wind Energy Museum »
back to top