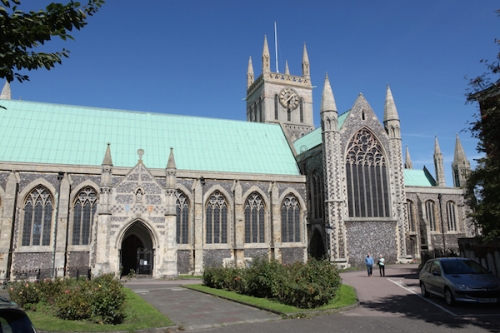 An exciting programme of free tours and drop in events is on offer in the Borough of Great Yarmouth during Heritage Open Days weekend, Thursday 10 to Sunday 13 September.

Book a tour back to World War II at ‘Blitz Street’ Scratby (10-13 September), or a guided walk On the Warpath: Piers and Bombs (10 September). Go on a tour featuring the Great & the Good Great Yarmouth (11 September) and get behind the scenes in Great Yarmouth Community Library (10 and 11 September).

Walk from Reedham to Polkey’s Mill and Reedham Marsh Steam House (10 September), or visit Morse’s Wind Engine Park at Repps with Bastwick, the only collection of historic wind pumps in the UK (10-13 September).

Visit the Elizabethan House Museum and Tolhouse Museum  (both 10-13 September) and go to The Priory Centre (10 September).

Pick up a Great Yarmouth Heritage Open Days leaflet at the Tourist Information Centre,  t 01493 846346, or download a copy of the leaflet from www.great-yarmouth.co.uk/heritageopendays.

A life size street scene made up of garden sheds transports you back to the 1940s and wartime life. See Nanny Morrison's cottage fitted out to make any wartime housewife proud, and buy sweets by the quarter in the corner shop. BBC comedy classic Dad's Army is brought to life with a full size replica of Captain Mainwaring’s office and new for 2015 visit the chemist with potions and lotions to cure all sorts of ailments. Visits by pre-booked tour only.

Guided Walk – On the Warpath: Piers and Bombs

Find out more about the Victorian piers and the former jetty, from which Nelson embarked for the battle of Copenhagen and the role they played in seafaring activities from the 1650's onwards. Also discover stories of the town's war efforts during both world wars and how the seafront played its part.

Join this walk and find out just how Yarmouth became Great, including how the town grew over time featuring fishing, railways, rows and monks and which personalities played starring roles in the town's development up to and including recent times.

Drop in events no need to book

The Fishermen's Hospital was built in 1702 by the corporation of Great Yarmouth for old or "decayed" fishermen. It could house up to 40 residents, but now only nine cottages remain with 8 residents. Tours will include cottage no 8, which will be opened especially for HODs visitors. A talk will be given each day at 11am and tea & coffee will be available for HODs visitors.

Tours at 11am and 2pm each day

Originally designed to be Assembly and Reading Rooms in 1863, the building was bought from the Norfolk Militia by the Masons in 1919 and has undergone significant refurbishment. Take a look around this magnificent building. A guide will be on hand to answer all your questions.

Great Britain’s only collection of historical wind-pumps. Experience this unique museum with guided tours starting every half an hour on the social history & heritage of the site. There will also be illustrated talks on the hour about Norfolk Mills and their people plus other local topics.

A chance to see a modern, light and airy church built in 1954 following the bombing of its predecessor in WWII. Learn about of this dissenting movement's presence in the town, from its establishment in 1644.

Get transported back to ‘Yarmouth past’ in this building with its tarred timbers and other nautical paraphernalia. See the arrow slits and gargoyles in the medieval wall and the 700 year-old well, which is still in daily use. Children can make a small clay item, to take home free.

Take a journey through crime and punishment in Great Yarmouth in one of England's oldest prisons. Learn of the fates of thieves, smugglers, witches, pirates and murderers. Hear both gaoler and prisoners tell their tales of transportation, incarceration and execution.  On 12 and 13 September, visit a convict in the cells and discover what hard labour really meant.

Great Yarmouth Minster was built in 1101 and is the largest parish church in the country. It was bombed during WWII, with just the walls and towers left standing. Restored by Stephen Dykes Bower between 1957 and 1961, this wonderful church is full of fascinating stories and history. Special exhibition, The Sea and Great Yarmouth.

More than 200 years of lifeboat history is told through exhibits in the Visitor Centre. New tours for HODs, feature some of the historical tragedies on the sandbanks and the story of Caister Lifeboat to the present day. HODs visitors will also have the chance to see inside the lookout tower which is the operational base for today's Caister National Coastwatch.

Discover the lives of the families who lived here from Tudor through to Victorian times. The house gives you a feel for day to day domestic life with rich period settings and evocative sounds and smells. Be a house detective in the exciting HODs museum trail. Sunday 12 – make a Tudor Rose or a First World War poppy.

A beautiful, ancient Saxon church with round tower and thatched roof. Photographic displays show the village and church through the ages, including the Horsey flood.

This Grade II listed ruin appears on the English Heritage Buildings at Risk register and is currently a conservation project led by the Great Yarmouth Preservation Trust. Information will be available about the progress so far with access in the ruin for HODs visitors.  Flintknapping demonstrations and taster sessions Friday 11: John Lord will demonstrate working with flints in an architectural setting.

Children’s Nature Workshop Saturday 12: Emma Purnell will be making a bug hotel for the ruin gardens to encourage wildlife.

Children’s Archaeology Activity Day Sunday 13: Giles Emery will be doing archaeologically based activities aimed at budding young archaeologists to come and try out.

Saturday 12 September 9am to 4pm

Dating from the 14th century church and re-built in the 18th century and beyond. Strong links with Caister Lifeboat throughout can be seen with memorials inside and outside the church, including a stunning stained glass window of Christ and the Fisherman, by Paul Woodruffe which commemorates the 1901 lifeboat disaster.

Early 19th century Quaker Meeting House in a walled garden, which was once the burial ground. Quakers have worshiped in Great Yarmouth since 1649 and beneath the present building you can see the remains of a 14th century cell occupied by Augustinian Friars until the Dissolution of the Monasteries, c.1536.

A former Navy hospital originally built for Nelson's men. In 1815 it treated 600 soldiers injured at Waterloo. During WWII the hospital became HMS Watchful, co-ordinating mine sweeping operations and acting as an information centre and administrative headquarters for the Royal Navy. Now sympathetically converted into apartments and houses, the Chapel and one ward have been preserved. Escorted tours to the chapel and ward may be available on request on the day.

Winterton Church is renowned for its stately tower. The church has close connections with the sea: the crucifix that stands in Fisherman's Corner is carved from ship's timber, a trawler net forms its canopy; plaques record the valiant deeds of the village lifeboatmen, and a memorial records the sacrifice of Fr Clarence Porter, who died after saving a choirboy from drowning.

The site includes a working drainage mill, which will be working weather permitting. Beside the mill is an old steam engine house built in 1880 (no steam engine). Visitors will be allowed access to the buildings. Tours of Polkey’s Mill in small groups will be available. It is also hoped to have the mid-1940's diesel engines working and on show.

Take part in a guided tour behind the scenes of Great Yarmouth Library. See examples of some of the local studies, collections and resources currently held in the depths of the library basement. These tours have been specially created for HODs visitors. Not suitable for children under the age of 16.

A new exhibition for 2015 HODs visitors. Take a trip down memory lane with a fascinating selection of images taken by staff photographers from the Great Yarmouth Mercury over the decades, covering the resort's heydays and holidays, plus pictures of local industries and businesses.

HODs visitors will be taken on a guided tour of the churchyard and cemeteries, led by local historian Paul Davies. Hear stories about the most important and interesting people buried there and be guided around some of the most significant monuments. The old and new cemeteries are also now recognised as a county wildlife site.

Local interest groups and schools will be exhibiting their heritage projects in the Priory Gardens. A marquee housing a vintage tearoom will provide refreshments and various activities will be taking place for HODs visitors including archery, donkey rides, brass band, and a wildlife 'show & tell'.

Originally a Benedictine Abbey founded in 1260 and used until the Dissolution of the Monasteries in 1536. A special exhibition for HODs visitors will feature photographs from its days as a school from 1854 to 1999. HODs visitors who attended school here will have an opportunity to share their memories and organisers would love to see mementoes.

More in this category: « Magna Carta 800 Greater Yarmouth’s First Pumpkinanza »
back to top