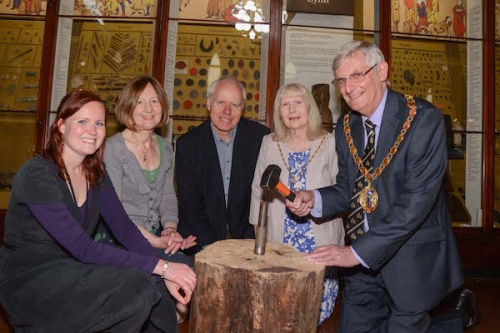 Monday 15 June marks the 800th anniversary of the sealing of King John’s Magna Carta, the document which laid the foundations for the rights and representations we enjoy today.

King’s Lynn will celebrate the anniversary on the 13 & 14 June. The Magna Carta 800 weekend will include a whole host of medieval themed activities including falconry displays, craft demonstrations, fire breathing and historical enactments (including a knights’ tournament and a proclamation by King John), which will be based in Tuesday Market Place from 10 am until 4 pm. All activities will be free of charge.

King John reputedly lost his treasure while trying to cross the Wash and families will be invited to take part in a King John themed treasure trail. Treasure trail maps can be collected from Lynn Museum, King’s Lynn Tourist Information Centre, King’s Lynn Town Hall and the borough council’s main office in Chapel Street, King’s Lynn, or downloaded from www.visitwestnorfolk.com. The maps will be available from 1 June and the trail is available until 14 June.

As well as enjoying the exciting displays and taking part in the treasure trail, over the weekend, people will be able to enjoy free entry to Lynn Museum where they can learn more about King John’s Magna Carta and the monarch’s particular associations with King’s Lynn. One of the things they will discover is that King's Lynn was one of the places to mint King John Pennies during John's reign. In recognition of this, people will be able to strike their own King John Penny as a souvenir of the day .

Cllr Colin Manning, Borough Mayor, said: "I have been fortunate enough to visit Lynn Museum on many occasions recently and I am amazed at the high quality of the displays and the many new activities promoted by museum staff. The striking of the King John Penny is a great way to mark the anniversary of the Magna Carta and is a fine example of just one of the ways that local people are able to access and participate in local history projects."

Magna Carta 800 has been organised by the borough council in partnership with Norfolk Museum Service and is part of the Stories of Lynn project. Cllr Elizabeth Nockolds, Cabinet Member responsible for the project said: “As well as being great fun, events like this help to bring our fascinating history to life and help make it relevant and accessible for new audiences – this is exactly what we’re aiming to do with Stories of Lynn.”

Due to open in 2016, Stories of Lynn, which will be based in King’s Lynn Town Hall, will include enhanced exhibitions, a staffed resource area, information hub signposting visitors to other local heritage attractions and a full programme of activities and events. The project received a grant of £1,850,600 from Heritage Lottery Fund.

The anniversary of the Magna Carta and King John’s connections with King’s Lynn are also the subject of an exhibition at King’s Lynn Tourist Information Centre (Custom House, PE30 1HP), which runs until 30 June (£1 entrance fee applies), with special focus on the King John Charter this exhibition provides a real insight into why, this famously unpopular king found such support in the town. The TIC has also organised a free quiz for children on 13 & 14 June (prizes available). There will also be a display about the King John Cup, sword and charter in the council’s customer information centre, Chapel Street, King’s Lynn.

For more information about the Magna Carta 800 event and treasure trail, or to find out more about free public events organised by the borough council, please visit: www.west-norfolk.gov.uk/events

During King John’s reign King’s Lynn was one of the mints to produce King John Pennies.

Lynn Musuem's coin minting kit is a replica of the equipment used in King's Lynn to strike a silver penny in the reign of John. It comprises a lower metal piece, which is embedded in a log, with the coin design on its top face. Then the upper die is a hand-held piece. The coin maker slips a metal blank between these two and strikes the upper die hard with a hammer to make the coin. The mint at Lynn Museum has the name of the Curator, Oliver, on the section where the moneyer would have had his. This is because to put the name of an actual medieval moneyer on the coins would be forgery! 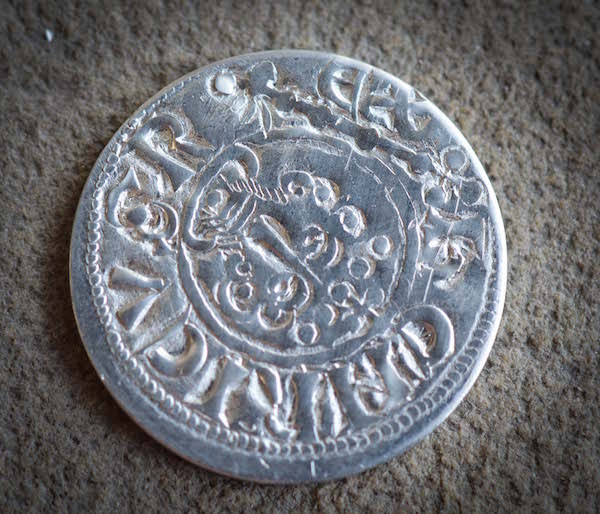 Most famous for sealing the Magna Carta, King John has special connections with King’s Lynn that endure today. Although widely unpopular during his reign, the king had support in King’s Lynn, not least perhaps because he granted the town a special charter in 1204.

The King John Charter, which is held in the borough archive, established Lynn as a free borough. This gave the town the power to rule itself locally, freed it from paying taxes to the crown and enabled it to create a merchants’ gild, which helped the town to prosper and become one of the largest and busiest ports in the country.

King John’s legacy can also been seen in the King John Cup and King John Sword, part of the town’s civic collections. Although neither object can be dated to King John’s reign, the very fact that they bear his name demonstrates the esteem with which the town held him for centuries after his death. People will be able to see and learn more about both objects at the new Stories of Lynn exhibitions opening at King’s Lynn Town Hall in 2016.

Opening in 2016, Stories of Lynn will enhance and remodel the town hall complex, allowing people to explore the buildings and learn more about the economic and social history of King’s Lynn – one of England’s most important medieval port towns.

Using the archive, collections and fabric of the buildings, innovative interpretation devices and a diverse activity plan, the attraction will unlock the stories of the people who have shaped King’s Lynn.

Although based within King’s Lynn Town Hall, Stories of Lynn will act as a gateway to other heritage sites and attractions in King’s Lynn, drawing together elements of the town’s history to provide a complete story of our unique heritage.

The project has been made possible thanks to a £1,850,600 Heritage Lottery Fund grant and £800,000 investment by the borough council and has been developed by the Borough Council of King’s Lynn & West Norfolk in partnership with Norfolk Museums Service and Norfolk Record Office.

For more information about Stories of Lynn please visit: www.west-norfolk.gov.uk/storiesoflynn.