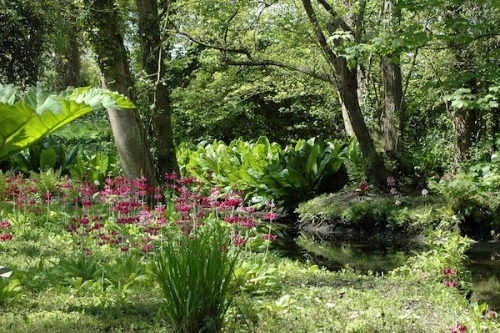 It’s Fairhaven Woodland and Water Garden’s 40th birthday this month and visitors are invited to share in the garden’s birthday cake on Wednesday, April 15 and join a 40th anniversary tour on Sunday, April 19 with George Debbage, Head Gardener from 1975-2007.

Lord Fairhaven, Chairman of the Fairhaven Garden Trust will be cutting the special cake on Wednesday, April 15 at 1pm. The birthday cake will be shared with visitors on the day. Lord Fairhaven will also officially open the new Hydrangea Path, which is part of the West Garden restoration, the key project to mark the 40th anniversary. The Hydrangea Path has been designed to add colour in the garden during the summer months.

The 40th anniversary tour will feature the West Garden, where George will talk about the work that he is currently doing to help restore the area. He will also explain the impact of the 1976 and 1987 gales and will take visitors to parts of the garden that were replanted and look at how they have developed. George will also visit the Sensory Garden, which was his final project before he retired as Head Gardener and manager on January 1, 2007.

Louise Rout, Fairhaven Garden Manager said: “I am very pleased that Lord Fairhaven will be joining us on April 15 to cut our birthday cake and open the new Hydrangea Path. I am looking forward to sharing the cake with visitors on the day to mark our birthday and also to welcoming George Debbage on April 19, who will give a unique insight into the development of the garden over the last 40 years.”

Fairhaven Woodland and Water Garden is at South Walsham, nine miles east of Norwich, signposted off A47 at B1140 junction, t. 01603 270449, www.fairhavengarden.co.uk.

The garden is open daily all year 10am to 5pm (closed Christmas Day and closes 4pm during the winter), also open Wednesdays until 9pm from May to the end of August. Entry is £6.20 adult, £5.70 concessions and £3.65 child (under 5 free). Free entry to tearoom, gift shop and plant sales.

There is wheelchair access throughout the garden, including a Sensory Garden and plus accessible boat trips (additional charge). Visitors requiring special facilities are advised to telephone in advance, mobility scooters available.

College Farm
College Farm is a medieval house situated in the village of Thompson three miles from the market town of Watton.  It was built by Katharine's ancestors in 1349 as a College of Priests to serve St Martin's Church and the villagers of ...
Explore

FlexiMed Training Pets
We are the providers of Pet First Aid in Dereham, Norfolk. We aim to provide a service which is flexible and great value for money! We cover all areas including Fakenham, Norwich, Swaffham, Aylsham and everywhere in-between.  Our ...
Explore