60 years on the Broads 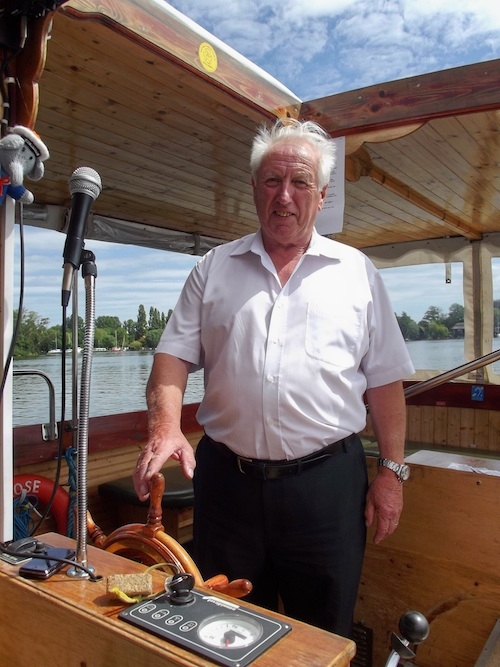 John Burton (74), one of the boat drivers at Fairhaven Woodland and Water Garden at South Walsham, retired on Tuesday 15 July after eight years at Fairhaven and 60 years involved in the Broads boating industry, as a boat builder and boat skipper.

He is a fourth generation Broadsman. His great grandfather Tom Burton (d 1895) was a wherry skipper. His grandfather Harris Burton, also a wherryman, was a private skipper working for Dr Day, whose boat was called The Dragonfly. John’s father, Ted Burton, worked for C & G Press and skippered Grey Dawn, a 10 berth motor cruiser.

John Burton completed a boat building apprenticeship with Herbert Woods, worked for Easticks of Acle, returned to Herbert Woods and then went into business with his father, running a hire boat business at Wroxham for four years in the late 1960s and early 1970s.

John’s next move was to return to boat building with Landamores (1972-84), then he worked with Colin Facey at Horning, before going to Norfolk Broads Yachting Company where he skippered the Wherry Yacht White Moth. The White Moth is now owned by the Wherry Yacht Charter Trust.  John managed the yard at Norfolk Broads Yachting Company before returning to Colin Facey again, and after five years, his first retirement.

John Burton said: “Not long after retiring, I visited Fairhaven with my grandchildren who asked to go on a boat trip. We enjoyed the trip and I half jokingly said, ‘did they want any more drivers’. The answer ‘yes’ came back from Louise, the manager, and I started driving the Primrose. I have really enjoyed working at the garden and meeting all the visitors, but the time has come to fully retire. I have renovated my own boat and look forward to having more time to sail it on the Broads.”

Louise Rout, Manager, Fairhaven Garden added: “We are going to miss John and his great knowledge of boats and the Broads. But the good news is that we are going to keep hold of him for occasional car park marshalling duties at our special events! We wish John well and many happy hours sailing his boat on the Broads.”

College Farm
College Farm is a medieval house situated in the village of Thompson three miles from the market town of Watton.  It was built by Katharine's ancestors in 1349 as a College of Priests to serve St Martin's Church and the villagers of ...
Explore

Bressingham Steam & Gardens
Bressingham Gardens The unique Bressingham Gardens are renowned worldwide for their horticultural excellence. With nearly 20 acres, four linking gardens and 8,000 plant species they can are a truly tranquil place, perfect for relaxing and ...
Explore

S1 Builders Norfolk
S1 Builders Norfolk cater for all the requirements of an ever changing environment. We are a family run Norfolk business that caters for all types of works from new to old. Our tradesmen use all traditional methods and materials, alongside the ...
Explore

Stephenson Smart
Stephenson Smart is a firm of Chartered Accountants established over 100 years ago based in King's Lynn, Fakenham, Downham Market and Great Yarmouth. We continue to build on our enviable reputation for providing excellent advise and first class ...
Explore

Gold Leaf Catering
Gold Leaf Catering provides exceptional food in Norfolk and surrounding areas. We can cater for weddings, private functions and coroprate dinners to give you a few examples. Our team strongly believes in sourcing and buying local produce whenever ...
Explore

More in this category: « People to Opt for a More Rural Lifestyle? HEART takes on 25 year lease of The Guildhall »
back to top